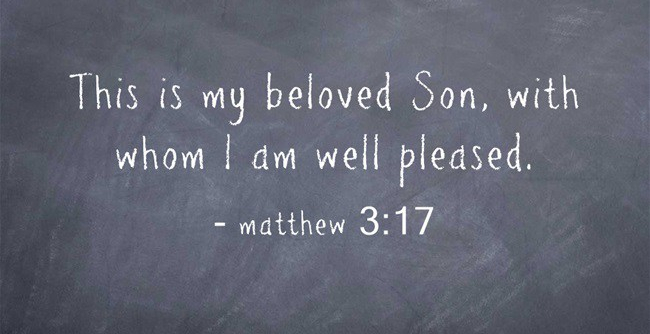 Who Is He? He is the Beloved Son

We have made it through Jesus’ childhood and are about to embark on his ministry! If you missed Friday’s post here it is: Who Is He? He Grew Up.

Today, we look at the inauguration of Christ’s ministry. This takes place at his baptism.

13 Then Jesus came from Galilee to the Jordan to John, to be baptized by him. 14 John would have prevented him, saying, “I need to be baptized by you, and do you come to me?” 15 But Jesus answered him, “Let it be so now, for thus it is fitting for us to fulfill all righteousness.” Then he consented. 16 And when Jesus was baptized, immediately he went up from the water, and behold, the heavens were opened to him, and he saw the Spirit of God descending like a dove and coming to rest on him; 17 and behold, a voice from heaven said, “This is my beloved Son, with whom I am well pleased.”

Luke records that Jesus was about 30 years of age when he began his ministry. When last we saw Jesus he was 12! So, 18 years have passed and he has come to be baptized by John the Baptist.

This was certainly an odd occasion. John’s baptism was a baptism of repentance, but here came a man who had never sinned against man or God. Why was Jesus coming to be baptized!?! Jesus says he must be baptized in order to fulfill all righteousness. A righteous requirement of the law? It doesn’t seem so.

This is one possibility to why Jesus was baptized:

There may also be something of the Israel typology here. Jesus himself had no need of repentance, but Israel certainly did; in submitting to John’s baptism Jesus is pointing to the people’s need. Matthew pictures Jesus as dedicating himself to the task of making sinners righteous, an appropriate beginning of his public ministry. John understood enough of what Jesus was saying to play his part; despite his initial hesitation he baptized Jesus.

“It is a very shallow interpretation indeed that makes the act of baptism the fulfilling of righteousness. In other words, it was not in order that He might set us a good example that Jesus was baptized, but rather that He might identify Himself with sinners as the One who was to make Himself responsible to satisfy every righteous claim for those who owned that they were justly under the curse of the violated law, and so with no righteousness of their own. They were like debtors giving their notes to God. Jesus endorsed those notes, guaranteeing full payment– that settlement was made on the cross.”

There are many other explanations as to why Jesus was baptized, but those can be saved for a later date!

So, back to the narrative! John finally consents to baptize the Lord. Then, we see a most peculiar thing. We see all three persons of the Godhead present at Jesus’ baptism. First, we see God the Son, Jesus, being baptized by John. Second, we see the Holy Spirit, who descended like a dove upon the Son. Last, we hear God the Father’s voice announcing to both Jesus and those gathered around that this man who was being baptized, Jesus, was His Son. If you ever wanted to prove the Trinity, this would be a key passage to turn to! God cannot be a god who just takes on three different forms. If that were so then he had a lot of running around to do if he was Jesus being baptized, then he had to return to heaven to descend upon him as the Spirit, and then run back up to heaven to be the voice of God the Father. This would also imply that Jesus would have had to stop being God while God was being the Spirit or the Spirit would have to stop being God if God were the voice of the Father. If read plainly, we see that the Trinity, Father, Son, and Spirit are all present at the baptism.

What the Father says is an echo of Psalm 2. “This is my beloved Son, with whom I am well pleased.”

The Lord said to me, “You are my Son;

today I have begotten you.

8  Ask of me, and I will make the nations your heritage,

and the ends of the earth your possession.

9  You shall break them with a rod of iron

and dash them in pieces like a potter’s vessel.”

Also, the Father’s words echo the words of Isaiah:

42 Behold my servant, whom I uphold,

my chosen, in whom my soul delights;

I have put my Spirit upon him;

he will bring forth justice to the nations.

2  He will not cry aloud or lift up his voice,

or make it heard in the street;

3  a bruised reed he will not break,

and a faintly burning wick he will not quench;

he will faithfully bring forth justice.

4  He will not grow faint or be discouraged

till he has established justice in the earth;

and the coastlands wait for his law.

Matthew’s account records that the Voice was observed by others, “This is my beloved son…” while Mark and Luke say, “You are my beloved son” which implies the Voice was speaking directly to Jesus as well! The Psalm reference is connected to the Davidic Covenant. God will establish David’s house and throne and kingdom forever. Here at the beginning of Christ’s earthly ministry, the Father identifies Jesus as His only begotten Son and the Son of David who will inherit the throne promised to the house of David.

In the Isaiah reference, the chosen servant is the object of delight to the Father’s soul. The servant receives the Spirit from the Father. Then, his ministry is described in the following verses. This servant must be Jesus. The same Jesus who was being baptized by John. The same Jesus who was anointed by the Spirit. The same Jesus who heard the voice of the Father. He is the beloved Son and he pleases the Father! He is the King from David’s line and the Chosen Servant of God. He will establish righteousness and justice. Ultimately, Jesus’ servant-like ministry leads him to the cross to purchase true righteousness for mankind. He died and three days later was raised from the dead. He is now seated with the Father in glory waiting to return and establish his rule on Earth.

One thought on “Who Is He? He is the Beloved Son”